Cost of the big dry

This has been a summer to remember – but for all the wrong reasons. Australia’s eastern states have experienced one of the worst droughts in living memory, culminating in severe bushfires, dust storms and floods in some areas.

This has been a summer to remember – but for all the wrong reasons. Australia’s eastern states have experienced one of the worst droughts in living memory, culminating in severe bushfires, dust storms and floods in some areas.

The impact on many families, especially in rural areas, has been enormous.

Sydney residents, for example, are seeing constant reminders of one of the most severe droughts ever recorded in NSW.[1] With the introduction of greater water restrictions in that city, the raging fires in south eastern NSW, Victoria, the ACT, and parts of SA, and huge dust storms across central and western NSW, the drought is affecting people’s livelihoods.

Recent heavy rains in Queensland and NSW have alleviated some of the problems but follow up rains are needed to well-and-truly break the drought. With the lack of rainfall leading to some of the lowest volumes of water entering Australia’s rivers and water storages, and some of the hottest temperatures ever recorded this summer[2], using water wisely and teaching our kids about the reality of living in the world’s driest continent, has become this summer’s preoccupation for many families.

“Don’t waste water” has replaced the old catch cry of “turn off the lights,” and has an edge of worry about the need to educate our children, without infecting them too much with our own adult concerns for the future.

With 98% of NSW drought-affected[3], and 67.4% of the land area of Queensland also drought-affected, there is now less water, hotter temperatures, crop failure, little-to-no summer crop plantings, and extremely low water stock and supplies in rural areas.[4]

In Water NSW’s monthly report[5], the severity of the drought on NSW towns along the major rivers and inflows can be easily seen. The towns of Wee Waa, Walgett and Narrabri are amongst some of the hardest hit and declared to be in Stage 4 Critical Drought.

Jennifer Simmonds, a Wee Waa resident, is a mother of a 23-year-old daughter and grandmother to a two-and-a-half-year-old. Having lived in Wee Waa, NSW, for about 12 years, and before that in the smaller regional towns of Gwabegar, Pilliga and Cuttabri, she’s no stranger to the heat and arid conditions. And she’s definitely no stranger to drought.

This particular three year stretch of drought, however, is taking its toll on her and her family. “The drought has been going on here for at least 15 years on and off. When, or if, it rains here it’s not widespread,” Jennifer says.

“The drought started to affect our business about two-and-a-half years ago. We normally do roadside mowing about three to four times a year. Last year we mowed twice. This is one of our main incomes, so we have four tractors sitting in the yard not being used, because no rain means no grass … (but) we still pay insurances and we are making payments on two tractors.” 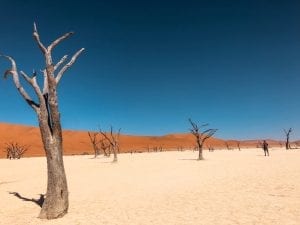 You can hear the disappointment and concern in Jennifer’s voice as she speaks of her and her partner’s livelihood failing in the face of this never-ending dry spell.

Jennifer’s disappointment and worries are echoed by Kerry Phillips, another country-based resident. Having grown up in Moree for the first 18 years of her life, she lived in Sydney for the next 30 years, before returning to Moree, where she and her husband, Byron, and their three young children, have been living for the past three years.

Kerry speaks passionately about the community’s preoccupation with drought and rain. “Every time I go into a shop or a supermarket (and) every time I see someone, we talk about rain. ‘Are we going to get rain this week?’ ‘Do you think it’s ever going to rain?’ Or the worst, ‘I’ve given up on rain’.”

The decision to return to Moree was prompted by the need to help her father manage his dry-land property. “Due to my dad’s health and age, I now look after the running of that business,” Kerry says.

“We’ve just had to let our farm manager of 33 years, go; we just couldn’t afford to keep him employed. We’ve had to sell all the cattle, and in my dad’s 74 years on farms, he has never had a time without cattle. He’s now considering even selling the property; he has no cash flow and has overdrafts. There are financial decisions that have to be made that eat into our cash flow.”

But it’s raising children in the drought that Kerry finds particularly challenging. They live seven kilometres from town in a four-bedroom weatherboard home and have air conditioning inside, but the veranda is not enclosed. The consistent 38-plus degree days and dry conditions make outside play for her children, virtually impossible.

“We’re so often stuck inside in the air conditioning, and being a country town, there’s no indoor children’s playgrounds – no Lollypops, no Monkey Mania,” Kerry says. “We don’t have inside options, so when it’s really hot and dry, there’s not a lot to do with kids. And of course, when our money’s tight because of the drought anyway, we don’t want to run the air conditioning. And with the mental impact as well, it’s a perpetual cycle of difficulty.”

But Kerry reminds herself that other communities are doing it tougher. With a reliable underground bore, Moree isn’t on water restrictions and the town’s supply is safe to drink. For example, Walgett, just over 200km away, is doing it particularly tough. A simple Google search returns harrowing stories of people’s suffering in and around Walgett, due to issues around safe drinking water.

If light can truly dispel darkness, it’s the witness of the community groups and charities who, while not able to fully relieve people’s suffering, have stepped in to help supply much needed water, where other systems are failing.

The pressures on communities and the land due to the drought, are extreme and widespread. While the land cracks and cries out for rain, so do the people. Jennifer has joined other small business owners calling out for economic stability in their farming businesses. Kerry and Byron, along with many others, are struggling to raise their families and manage their properties.

There are other pressures too. In some places, one parent must separate from the family periodically to work up north, far from home. And then there’s the untold burdens on families who are unable to maintain or secure employment at all.

So much can be said of the drought, but at its heart lies the people and families affected daily. Those living a simple equation: No water equals no livelihood. No water equals dying animals and failing crops. No water equals enormous pressure on relationships and adapted lifestyles. And living in capital cities like Sydney or Melbourne, where sourcing drinkable water is not a concern and where many are not reliant on rain for employment or income, it is difficult to fully understand the devastating impact of the drought on communities, families and individuals.

As we join in solidarity as the church across Australia, we respond to the bishop’s call to prayer for rain that will end the drought. In doing so, we hope and pray that those who are suffering in drought-affected areas are not taken to the breaking point, that in God’s mercy, the drought will end soon.

[1] WaterNSW. (2019, July). Why is the current drought so bad? Retrieved from https://www.waternsw.com.au/supply/drought-information/regional-nsw.

[2] WaterNSW. (2019, July). Why is the current drought so bad? Retrieved from https://www.waternsw.com.au/supply/drought-information/regional-nsw.

[3] WaterNSW. (2019, July). Why is the current drought so bad? Retrieved from https://www.waternsw.com.au/supply/drought-information/regional-nsw.

Majellan Media is a ministry of the Redemptorists of Oceania

We acknowledge Aboriginal and Torres Strait Islander peoples as the First Australians and Traditional Custodians of the lands where we live, learn, and work.