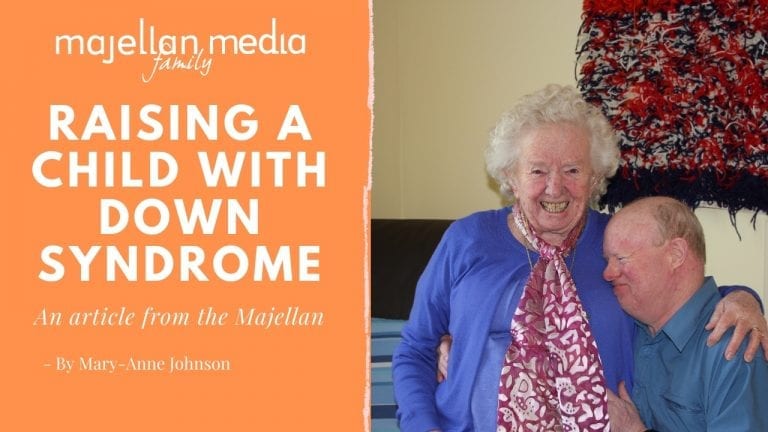 Like any mother and son, Lorna and Paul Castles have a special bond, and after a lifetime living under the same roof their affection for one another runs deep. Lorna is a sprightly 95 and Paul is 52 and lives with Down’s syndrome.

Until last year they were living in the family home in Devonport but it became apparent that managing on their own day-to-day was becoming more difficult. Paul’s older brother Gerard then stepped in. Mary’s Grange Nursing Home on the shores of the River Derwent, south of Hobart was able to accommodate both Lorna and Paul – and in adjoining rooms! They have both blossomed under this arrangement.

Lorna is a very proud and loving mother of two devoted sons. Gerard is a caring husband and father with his own consultancy business that takes him around Australia. Lorna says Gerard is a wonderful son who will often invite Paul and her out with him. Gerard has also placed her photos in an album and set up a Facebook page to aid her fading memory and to ensure extended family and friends stay connected with Lorna and Paul.

When not busy with the Parkside Foundation for people with disabilities, Paul spends much of his time with his mother, often patting her or giving her a loving kiss or hug. Although he is a man of few words, it is clear that he knows what is being said to him, and he makes himself understood with words and gestures.

Since moving into Mary’s Grange he’s started answering the phone when Lorna is not in her room. And he puts Lorna on the right track if she mixes up her stories, or forgets an appointment. In fact, he can be quite strong minded. As Lorna quips, “I’m not the boss! He leads me everywhere.”

While Lorna is watching TV, Paul is close to her, cutting wool to make colourful latch hook rugs. This craft work is a consuming interest for him now and there are samples all around the walls of his and Lorna’s rooms at the nursing home. The stock is growing as Paul hooks during the day and sometimes into the night if he can’t sleep.

It’s a family venture: Gerard buys the canvas and wool, Paul makes the rugs and Lorna backs them with material. Lorna, a former seamstress who made her own wedding dress, hasn’t lost her touch with a needle and thread! The rugs are much admired and might even be featured in an exhibition soon, says Gerard.

Bringing up a son with a disability was often a struggle for Lorna and her late husband Norrie, but the love and perseverance of this faith-filled mother has enabled Paul to live a full and healthy life.  Looking out their window at Mary’s Grange, Paul tells me that he can see the Iron Pot (lighthouse) by day and the Southern Cross at night.

As a boy, Paul attended St Paul’s Special School where he acquired his rug making skill. He has also been an athlete, participating in the special Olympics in Perth and winning five medals in swimming, bowls and running. At Sunday mass at Our Lady of Lourdes church in Devonport, he was well-known for his smile and his very loud singing!

Lorna has spent much of her life caring for Paul, but these days the table has turned and he is looking after her, along with rug-making, playing bowls and the guitar, and joining in the social life of the home.

Lorna, a cradle Catholic with an Irish family background, originally came from Melbourne to Tasmania to attend the wedding of her cousin to Norrie’s brother. Lorna already had a link to Tasmania, as her mother had grown up near Deloraine. Mrs Castles senior played matchmaker and lo and behold Lorna and Norrie were married in 1959.

Lorna has worked as a seamstress and dressmaker; she was also a clerk in the Postmaster-General’s Department in Melbourne; worked as a shop assistant at a newsagency, and for many years managed the tuckshop at the Catholic College in Devonport. She has been a very active member of the Catholic Women’s League, particularly with her handcrafts. Her cousin Sr Christine Astell was a member of the Little Company of Mary and a hospital matron. So important is her faith, a Catholic facility with a priest and regular mass were high priorities for Lorna, who still fondly recalls a pilgrimage with her late sister, Sheila, to Lourdes and Medjugorje.

Lorna is happy that Paul will have a permanent home when she is no longer around. Content, she loves the atmosphere and care provided at the home and the friendship of the other residents and the wonderful staff. She enjoys all the activities on offer and is grateful for everything that is done for her.

It’s also fair to say the chief joy and support in her life is the close companionship and friendship she shares with her son Paul.